Sign up to win a pint of Bernie's Back 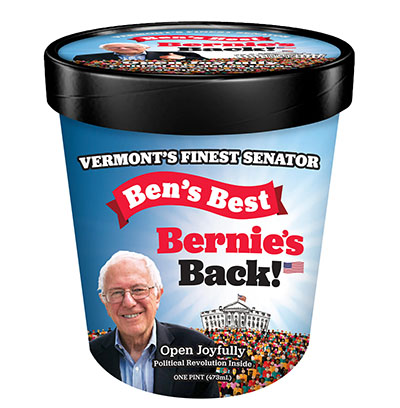 Hot Cinnamon Ice Cream with one very large chocolate disc on top and a (very stiff) butter toffee backbone going down the middle.

The chocolate disc represents all the wealth that has risen to the top 1%. The backbone represents Bernie's steadfast determination to un-rig our economy. And the hot cinnamon is our political revolution holding politicians' feet to the fire to make America work for working people of all races and genders.

Between now and August 9, our campaign is offering people a chance to win a limited-edition pint of "Bernie's Back" ice cream, created by Ben & Jerry's co-founder, Ben Cohen. All you have to do is add your name on this page to enter. Every pint is hand-signed and numbered by Ben and Jerry.

Void where prohibited. Entries must be received between August 2, 2019, and August 9, 2019. Click here to enter online. Forty (40) Winners will receive one pint of Bernie’s Back Ice Cream signed by Ben Cohen (approximate retail value of Prize: $60). Odds of winning depend on number of entries received. Promotion open only to individuals who are legal residents of the United States and are either U.S. Citizens or lawful permanent U.S. residents 18 years or older. All prizes awarded. Promotion subject to Official Rules and additional restrictions on eligibility. Sponsor: Bernie 2020 Inc., PO Box 391, Burlington, VT 05402.